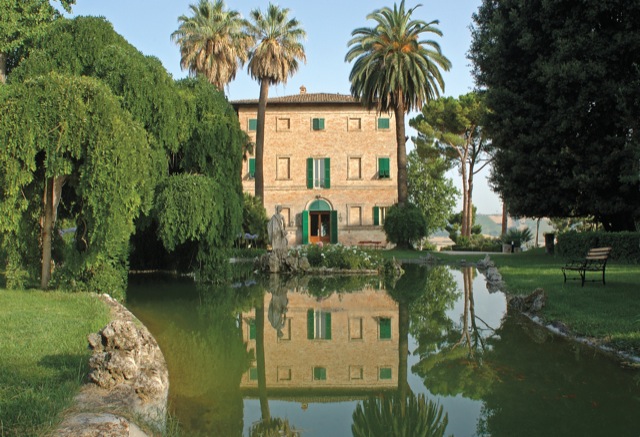 The Borgo Storico Seghetti Panichi lies on a hill overlooking the Tronto River Valley. From the historical archives of Ascoli Piceno, we know that by 1300 there was a “Castle on the River Lama”. This building was a watch tower, defending vast estates and the border of the Papal States against the Kingdoms of Naples and the south. The position has a 360° visibility, from the Sibillini Mountains to the Adriatic Sea. This monument of national interest has an architectural structure that shows the marks of seven centuries. The ancient crypt of the castle (now a large kitchen) has a typical arched roof. The oratory dedicated to St. Pancras was built at the end of the C16th, while the facade of the historic home was added in the late C17th and early C18th to make the castle more habitable. The villa dates back to the early C19th and finally, between 1875-90 the historic garden was planted by the famous German botanist Ludwig Winter. He was born in 1845 in Heidelberg, graduated in Potsdam, and learnt his art at the Jardins des Tuilleries.

END_OF_DOCUMENT_TOKEN_TO_BE_REPLACED

Tailor-made itineraries to private castles, villas and palaces still lived in by families